Little By Little Recovery is Possible 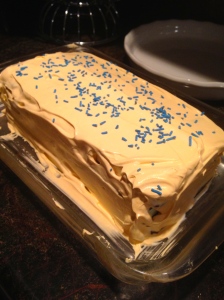 This weekend is my good friend’s birthday!  Since I’ve been so inclined to bake lately I asked him, “If you could have any kind of cake in the entire world for your birthday what would it be?”  Much to my surprise, without a thought, he responded, “ICE CREAM CAKE!”  This man is turning 34.  Regardless, I was excited by the unexpected challenge so I began doing some research on ice cream cakes.

It seemed relatively simple, just layers of ice cream and cake!  Pretty much exactly what I expected.  I, however, was having a particularly busy week and the amount of work seemed like it would very time consuming.  A project for the weekend perhaps.  Unfortunately, I didn’t have a weekend since the party was planned with only a few days notice.  Instead, a neighbor of mine told me about a really simple way to assemble a delicious ice cream cake in no time at all and thus, this method was conceived! 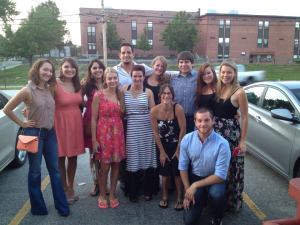 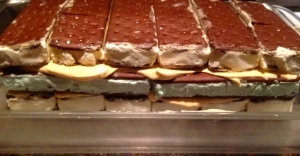 Making this ice cream cake for him and enjoying it with the company of my friends reminded me that there is no age limit on the pure, unadulterated enjoyment that ice cream cake can give.  Who says adults can’t act like kids from time to time?  I’m certainly not mature and responsible most of the time anyways!  The night was a blast, we all dressed up and went out to a local Nepalese restaurant for dinner.  Then we drove to my house for cake, a bonfire, and swimming!  I love happy summer nights like that – what a treat. 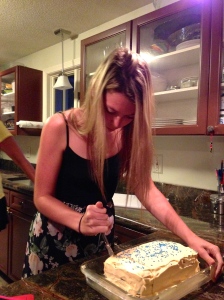 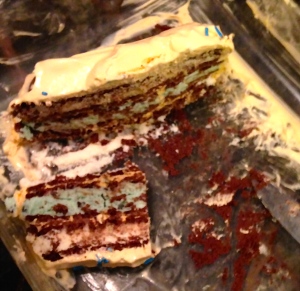 The Method:
1. If desired, dye the cool whip the color you want the outside of your cake.  The cool whip is the “frosting”
2. Begin by laying down six of the ice cream sandwiches side by side in a large baking dish
3. Cover the 6 sandwiches in a layer of cool whip
4. Lay down six more sandwiches on top of the cool whip layer in the opposite direction (see pictures)
5. Cover those sandwiches with another layer of cool whip
6. Continue this process with one more layer of sandwiches
7. Frost the entire outside of the cake with cool whip
8. Top with sprinkles
9. Freeze for at least a few hours, overnight if possible
10. Allow the cake to thaw for 15 minutes before serving
11. Enjoy!